Eddy has been working on community safety since he worked for the Gresham Police Activity League in the 1990’s. Eddy knows what it’s like to lose close family to senseless violence and to not feel safe in your neighborhood.

Under Eddy’s leadership as your City Council President, Gresham has made substantial investments in keeping us safe such as:

“We have the support of the community, council and leadership,” said Chief Travis Gullberg in the Gresham Outlook.

Eddy has also worked to support Gresham firefighters and first responders. As a youth Eddy wanted to be a firefighter and completed EMT training before life called him down a different path. As a City Councilor Eddy has worked to hire and train more firefighters and lay the groundwork to open up more fire stations to keep our growing city safe. 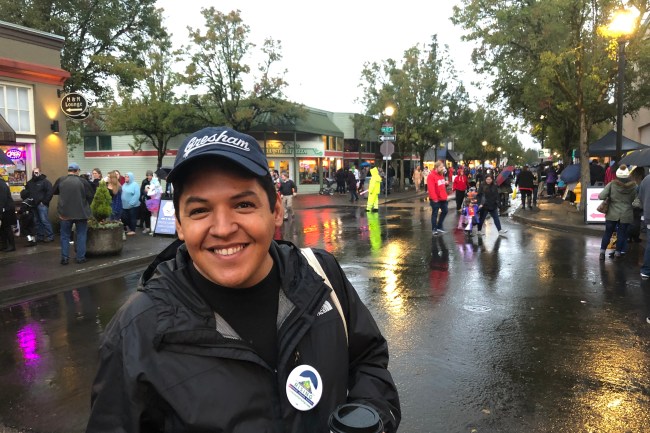 Eddy led the effort to capitalize on millions of dollars of funding for housing from the voter-approved Metro housing bond. When the bond passed in 2018 existing Gresham city leadership was refusing to take any of the money allocated to Gresham – that meant they were turing their backs on over $26 million dollars for housing in Gresham.

Fortunately for Gresham, Eddy was elected to city council in 2018 and immediately began advocating and fighting for the funding. Thanks to his leadership, Gresham has now received $26.7 million and allocated $16.4 million to build housing. Voters set the goal of creating 187 units of affordable housing, Eddy was able to create 374 units and more to come.

Albertina Kerr
Eddy worked to fund the building of Albertina Kerr. This is now the largest net zero energy affordable housing project in the Pacific Northwest is powered entirely by solar energy. Residents won’t pay for utilities (electricity, water, sewer) and will have access to free high-speed internet.

Eddy knows that it is much cheaper to keep people housed than to rehouse people who have become homeless.

After the COVID eviction moratorium was lifted Eddy led the city to reach out to landlords to get information on who was behind on rent and at risk of losing their housing. The city then looked at who could be covered under remaining COVID emergency funds from the state and found there were 400 households that would fall through the cracks . The city then worked with the landlords and tenants to cover their rent. This was a simple, cost effective strategy that kept hundreds of people housed.

The reality is that so long as rent and single-family homes remain unaffordable, there will be an unhoused and at-risk population in Gresham. We have to do everything we can to change these conditions and create more housing success stories. Everyone in Gresham should have a place to call home.

Economic security means communities with good schools, affordable housing and childcare, accessible opportunities for seniors and safe, walkable neighborhoods that attract businesses of all sizes and the jobs that come along with them. When families can thrive at every stage of life, so will our local economy. That’s the Gresham Eddy is working to build.

As a successful small business owner, Eddy knows we need to support the businesses that are the backbone of our local economy. As City Council President Eddy has:

Eddy was a leading voice in responding to the needs of local, small businesses when COVID hit. He helped provide city-funded emergency grants to small businesses and put a moratorium on the interruption of utility services and housing and commercial evictions.

Now, Eddy is advocating for the equitable and efficient distribution of the COVID vaccine as supplies become available. The sooner we can get the most vulnerable community members vaccinated, the sooner small businesses can return to operating at full capacity and kids can get back to in-person school.

Recognizing that we still have a long road ahead of us, Eddy is also creating a taskforce to include Gresham’s most impacted communities, service providers, local business, and government to design a recovery strategy that includes all our residents.

In addition, cities with parks and greenspace help mitigate the impacts of climate change by absorbing storm water, providing cooling shade, and serving as carbon sinks.

Eddy has led good governance initiatives to make City Hall more accessible and transparent in its work. This has led to more people being involved in local decision-making. In addition, a charter review committee has been appointed and will be addressing initiatives that Eddy has put forward, including an independently elected auditor, geographic zones for city elected positions and term limits.

These initiatives are in addition to an ongoing effort by Eddy to increase diversity on city public boards and commissions. We can not effectively solve problems for a diverse community without all perspectives at the table, especially the voices of those most impacted by the problems.

If you would like to be considered for any of the city boards, commissions or a future task force, please fill out this form and select “serve on a public board or commission.” Our staff will be back in touch to learn more about your interests!